If you have not met Dorothy, you should.  She is a storyteller of the best kind; generous in thought and word, and in deed. She lives simply in Romania, and has a ministry to children in her church, and to widows and other orphans brought across her path. With her ‘love gift’ of $2500 (CAD) she did not hesitate but jumped at the opportunity to really make a difference in the life of one.

Dorothy has done a small thing in a great way. She has taken a small gift, and bought a house for a widow.

Yesterday was the big day to meet the widow selling her house at the town hall. A few weeks passed before we could all get together (her granddaughter ran around getting the paper work finished, and I ran into several blocks every time I tried to get out all the money for the transaction).

But at last we got together Tuesday at 9 am. My widow, Lindralina, and the other widow selling, went in to talk to the mayor. They came out and said this process is no longer carried out at town hall. The granddaughter went in to find out more, while the other witness and I waited outside.  She came out explaining that we must go to a notary and get some handwritten document, etc. It appeared we were going to leave without succeeding in what we came to do. To be honest, though I wanted to believe that it could happen in just one trip, that has never been my experience here with anything involving legal papers.

Still, by faith I came with a house-warming gift for Lindralina and some pastries and coffee to celebrate after.

We were blocking the entrance as the discussion went on, so I went to sit in the van while the ladies decided what to do next. Based on what the granddaughter said, it appeared the house could never belong to Lindralina, though the granddaughter said she was welcome to still live there. Lindralina was disappointed and said this was of no benefit to her (*will explain why below).

As I sat in the van, I prayed and knew the Lord could yet do a miracle in His time.

When they came out, Lindralina gave me some explanation of further steps (which I did not fully understand), yet said I should give the money.

I had been concerned this might happen so I said, "I won't give the money until the house is yours."

Lindralina whispered what I said to her daughter. But it turned out I did not understand the situation!

The granddaughter of the widow selling asked me for a pen and began to use the hood of the van to fill out a number of documents. I noticed a man from the town hall come out as well - to act as a witness, I realized later. 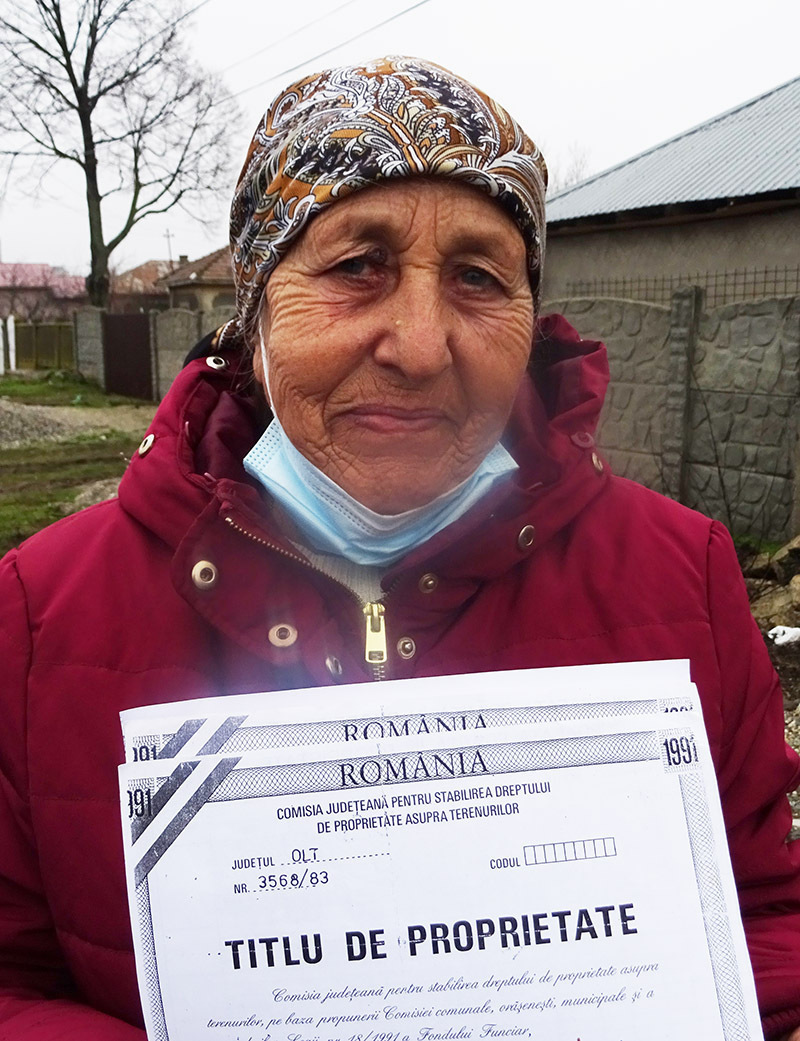 By the end of it all, Lindralina was finally given the house documents. For the first time ever, she is the proud owner of her own place!

She can work for people in the vineyard or garden during the Spring and Summer, but Winter is hard as she has no income whatsoever.

So God did a miracle yesterday and somehow resolved the situation. Hallelujah!!!

Pictured below is Lindralina (and her daughter) with proof of ownership papers:

Please pass on HUGE, HUGE thanks to CrossRoads and the Missions committee for this wonderful gift with which they have blessed a precious widow who lived for years without even electricity and water. Now she has both, as well as a safe home and stable roof over her head.  (She went to her old place where she still has some stuff stored, and it was a disaster, she said. It was wet inside and falling apart. She got out just in time!)

P.S. Please pray for Lindralina and her daughter, Adela. We went to Adela's after the meeting at town hall to have coffee and, of her own accord, Adela started a discussion re. her beliefs about every religion and mankind. It was a natural opportunity to share what God says about every human being and what He declares is the way to Him. I challenged her to ask Him to reveal to her what the truth is.